Pala is one of the traditional and unique dance forms of Odisha. It is the combination of folk dance and folk songs which are mainly based on Old Odia literature and culture of Odisha. People believe that ‘Pala’ was developed earlier than 1700 B.C. This dance represents the social harmony in Hindu and Muslims.In this dance people worship the God “Satyapeer”. ‘Satya’ represents the Hindu God ‘Satyanarayana’ while ‘Peer’ represents the Muslim God ‘Peer’, in this way Pala dance represents unity of both communities.
Pala group consist of 5 to 7 members. The leader of the group, who is dressed differently and wearing many ornaments, very big ear rings and necklaces is called “Mukhia or Mukhya Gayak”. He always sings the song by waving the ‘Chamar'(whisk) and a pen or small stick. ‘Sri Palia’ is the main person who repeats the stanzas of Mukhya Gayak. He works as a supporter of the leader of the Pala Group. The person who plays the ‘Mrudanga’(One type of drum which is played without using sticks, only by using fingers) is called ‘Bayak’. Remaining members of the group are called ‘Palia’ means ‘chorus’ because they repeat the songs and different stanzas with the Mukhya Gayak and Sri Palia. In a Pala group, Mukhya Gayak won’t play any musical instrument, Bayak plays a Murdangam and all others play ‘Jhanja'(Cymbals).

Basically, Pala is divided into two categories. The Baithaki Pala and the Thia Pala.

At the starting of Pala, all members except the Mukhya Gayak enter the stage and play very loud music by beating drums and cymbals. After a few minutes the Mukhya Gayak moves to the stage. They together perform ‘Puja’ (Prayer) to the God Satyapeer. Then, they slowly enter into the main topic of the show, which is mainly extracted from Hindu mythologies such as Ramayan and Mahabharat. In the show the Mukhya Galyak plays the leading role and sing songs and explains their meaning in a very simple manner. They sing highly innovative songs which is full of knowledge and moral values. The members not only sing and support the Mukhya Gayak but also explain different topics with acting. Their program is not only related to mythology but also to comedies and satires. 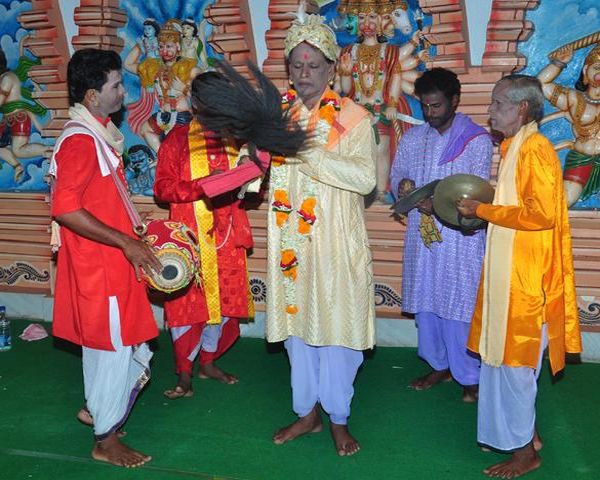