DASKATHIA, once a popular art form confined to Ganjam, has spread to all other Districts of Orissa. ‘Dasa” means a devotee. ‘Katha’ means two wooden pieces played in tune with the prayer of the devotee. The party consists of two persons. One is the chief singer, the other is the ‘Palia’ who helps him in all respects in singing and acting. The two persons stage a whole drama, act all the parts, change their tone from minute to minute. They relates humorous stories in between to break the monotony.

This folk form is mainly associated with a worship of Lord Shiva and thus, during the performances, dedications to Lord Shiva mentioning it’s various forms like Rudra,Hara,Mahadeva,Shankar and Bholanath etc is prescribed. Along with the stories and greatness of other Hindu gods like Vishnu, Lord Krishna, Ganesh are Kali are depicted.Originally, only people of the so called “lower caste” were engrossed in this form of dance, but later the caste people, notably the Kshatriyas and Brahmins also started to participate in them. The attire is rich and luxurious, with a turban on the head and a long silken coat. Along with this form of a dress the postures and gestures that the artists depict creates a visually pleasing effect to the viewers.

The performance is considered ritualistic and secular in nature.The performing group is usually a pair with the main singer(Gayaka) and the ‘Palia’ who plays second fiddle to all the singing and acting dancing.They are present for the entire duration of the performance. They produce spell binding performances by changing their tone and pitch throughout along with the dancing.To break the monotony they recite humorous stories. Each of the two have a pair of sticks. The performance usually begins with an invocation, which in most cases is composed by local poets. This is followed by a strange chorus effect where both the performers beat their stick to a tune and when done in perfect harmony it produces a wonderful effect. The theme then is announced by the announcer. In most cases the theme has a mythological significance.

The performance also has a strong dramatic part. In some cases it overrides the importance of the music and dancing.The dramatic part consists of verbose stanzas taken from Puranic references and is presented with a great vigor.The music is very traditional in nature. Also, the speech patterns, dialect and the style of language is predominantly southern rural.In many situations it suggests that the importance of Ganjam district in South Orissa where this form of dance and entertainment is hugely popular.Accent used in the language, breaking of syllables with notes, typical pronunciations, pause in sentances all profusely bring out the essence of Southern Oriya literature.

In Daskathia, two artistes narrate stories from the timeless epics through poetic singings. The only musical instrument used is the ones formed from small sticks. The sound is generated from beating these sticks. It was quite popular in rural and urban areas a few decades back. But, with the advent of modern mediums of entertainment, it is fast losing its support base. Till now, Daskathia troupes are being used as major means of communication for government’s awareness programmes regarding health and different projects in rural areas 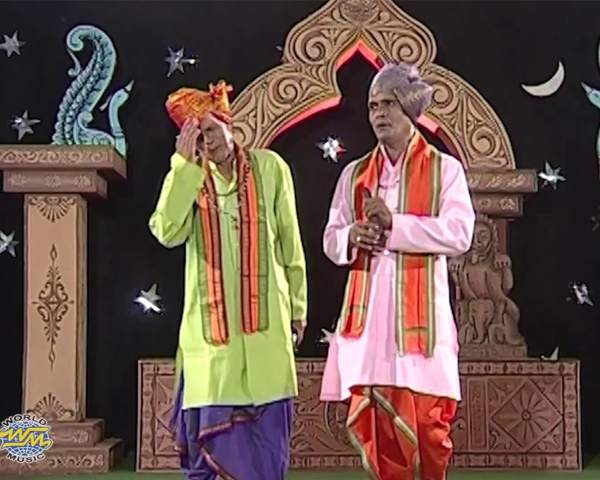