Odissi Dance also known as Orissi (Oriya: ଓଡ଼ିଶୀ), is one of the eight classical dance forms of India. Its origin is traced to the state of Orissa in eastern India. It is the oldest surviving dance form of India on the basis of archaeological evidences. The dance has a mention in Bharat Natya Shastra as ‘Odra magadhi’–one of the ancient names of Odisha (Orissa) other than Kalinga and Utkal. The five departments of Odissi are Mangalacharan, Sthai or Batu, Pallavi, Abhinaya and Moksha. Odissi has its own style and music.  On the temple walls of Bhubaneshwar, Konark and Puri, the Odissi dance sculptures are clearly evident. This dance style combines both Tandava and Lasya. Odissi has become as a classical dance form only in the last 60 years. The rhythm, Bhangis and Mudras used in Odissi dance have a distinct style of its own. The dance is performed mainly with the theme of Infinite love of Lord Krishna and Radha.

Finally, a word about technique and repertoire of Odissi dance. In Odissi dance, important parts are called Padabhada, Bhumi, Chari, Biramani, Bhangi and Rasta (Mudras) etc. The different items of Odissi dance are listed in the order in which they are performed:

Odissi dance has a rich and varied repertoire. The most typical pose of Odissi is the ‘Tribhanga’ where the body is bent thrice. A fundamental posture of Odissi dance is ‘Chawki’. Like other classical dance forms, Odissi admits of the division into nritta (pure dance) and nritya (expressional dance and natya (Drama). 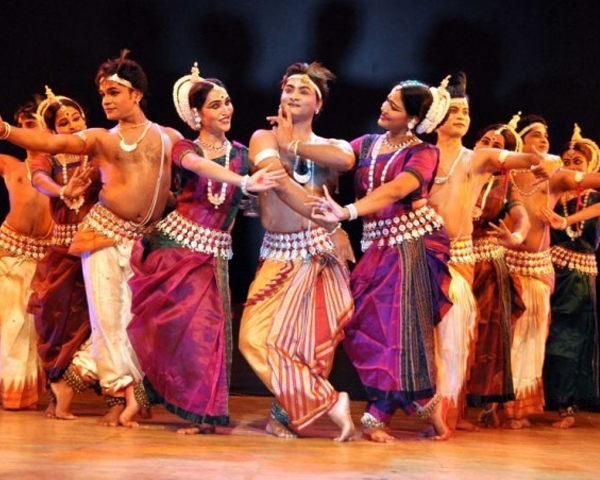